Today we have Richard M. Cochran over for a chat.  Richard M. Cochran resides in Riverside, California after having lived in Minneapolis, Minnesota and Chicago, Illinois for the majority of his life. Inspired by the likes of William Burroughs, Ernest Hemingway, and George Romero, his writing tends to be a mash up of horror, surrealism, and literary fiction.
Self published works include Waiting to Die ~ a zombie novel, Silently Inside, and No Rooms without Walls.
He has also been published by Wild Wolf Publishing in their Holiday of the Dead Anthology, Rainstorm Press, and Cruentus Libri Press. 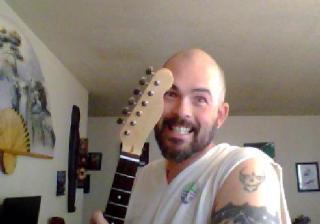 Could you tell the readers a little bit about yourself?

I was born in Northern Minnesota on a crisp spring morning in April, 1975. My best friends were a snow drift and a tree I named Larry. Seriously, no one lives that close to the Canadian border without being acquainted with a few trees. Mind numbingly desolate area … could be why I read so much.
At the age of five, I moved to the south side of Chicago with my mother and step father. By the time I was thirteen, I was beaten on a daily basis by a group of gang members who wanted to induct me into their little click. Fearing for my life, my parents hastily moved me back to northern Minnesota where I finished high school and did a stint in college in a continuation program to secure my diploma.
I lived in Minneapolis for seven years and cut my teeth with my greatest friend and mentor, Joe Smith Jr. He introduced me to music, Buddhism, science fiction and philosophy. He also happened to be one of the key people to encourage my writing.
In my late twenties, I moved to Riverside, California to help my grandparents – one of which was having a difficult health issue. And that is where I remain, plugging out hours upon hours of writing.
Do you prefer the term Horror, Weird Fiction or Dark Fiction?
No matter what you call it, it will always remain Horror.
Who are some of your favourite authors?
I grew up on Lovecraft, so he will always have a special place in my heart. Beyond that, I love Cormac McCarthy, Hemingway, Jack Kerouac, William S. Burroughs, and Haruki Murakami.
As far as Horror, my favourites include Iain McKinnon, David Moody, Anne Rice, Paul S. Huggins, Joe McKinney, and Matthew Darst.
Ray Bradbury, Hugh Howey, Asimov, and Richard Matheson all deserve a mention as well.
What are you reading now?
I just started Joe McKinney’s Flesh Eaters last night after devouring Dead City and Apocalypse of the Dead. He’s such a great writer. I’m also working on Rant by Chuck  Palahniuk and Dance Dance Dance by Haruki Murakami.
Which book do you wish you had written?
The Road by Cormac McCarthy. That book absolutely moved me to my very foundation.
How would you describe your writing style?
I’ll have to quote Hunter S. Thompson …
“As things stand now, I am going to be a writer. I’m not sure that I’m going to be a good one or even a self-supporting one, but until the dark thumb of fate presses me to the dust and says ‘you are nothing’, I will be a writer.”
–from “Gonzo”
Describe a typical day spent writing. Do you have any unusual writing habits?
I write in the early morning, somewhere between 3 and six AM on weekdays and 3 to 11 AM on weekends. My writing includes a pot of the blackest coffee I can find and half a pack of cigarettes. Beyond that, it’s just a lot of cursing and tears.
What piece of your own work are you most proud of?
Silently Inside came from the heart, but Waiting to Die came from passion.
Can you tell us about your last book, and can you tell us about what you are working on next?
Waiting to Die started out as a series of short stories and kept building. I love all things Romero – even his less desirable work – so I wanted an air of ‘traditional’ living dead inspired zombies, but with the theme directed toward the struggles of the characters. I wanted to tell of their plight, their pain, their lack of understanding as to what was happening to the world around them. I have the intention of continuing that struggle and making it into a series. This is also where I would like to give my appreciation to Peter Fussey for the unbelievable cover art and Meagan Masters for all the proof reading and editorial work she did for Waiting.
My next novel is Garden of Waste. It’s set in an undisclosed time after the dead have risen and concentrates on one man’s coming to terms with all that he has lost. Through the absolute desolation, he is able to discover himself and what really matters when everything else is dead and covered in dust. It’s a story of love and turmoil, of regret and condemnation, of pain and sin. It will be a standalone novel.